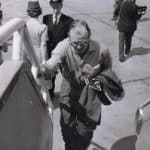 Bridge Travel Group, founded in 1949 by Jerry Bridge’s late father, Walter Bridge, specialised in European short break package holidays. Walter was both an enterprising entrepreneur and an early UK travel industry pioneer. Jerry has two early memories of his father. One – was of him racing to the Post Office with bundles of tickets and two – him always being the last one onto the beach when we were our annual family holiday in Majorca. And why is that you ask? Answer – because he was always phoning the office to get the ‘booking stats’! He had started a travel company in 1948 offering a variety of holidays to different countries in Europe but soon realised that in order to succeed he needed to ‘specialise’. Swiss Travel Service was the first company to be launched in such a way in early 1949.

Walter recruited Alma in 1951 & before too long, with his help, she set up Paris Travel Service – it was the first company in the UK to actually specialise in just one city – how unique was that?! The Bridge Travel Group went from strength to strength. Sadly, despite Jerry and his three brothers all working in the business at various stages (usually school holidays) none were ready to commit to a life in the travel industry. Consequently, the successful business was sold in 1979.

We strongly suggest you view the You Tube video to get a real insight into the early days of both the Bridge Travel Group and the travel industry – it’s also culturally very interesting.

What to do in Wellington

Over 30 years of Selling tailor-made holidays to Australia